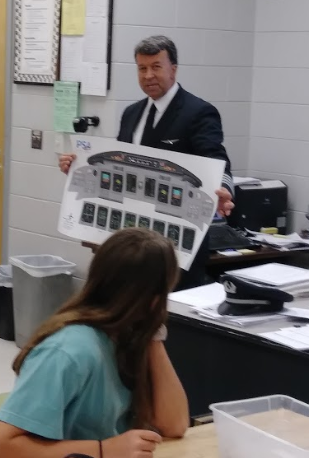 Kennedy discussed how he became interested in aviation after a cadet visited his school, how he earned his appointment to the Academy and how his time in the Air Force prepared him for his current position as pilot with PSA Airlines.

Kennedy showed students a modern cockpit control panel and discussed how the STEM areas impact his job. He also discussed the flight control systems of an airplane and the physics behind flight.

PSA Airlines is a subsidiary of American Airlines that flies American Eagle jets to a number of airports throughout the eastern and midwestern United States.

Polk Middle students will use the information that Kennedy shared to help them build planes for a competition to be held at the end of their current unit of study.