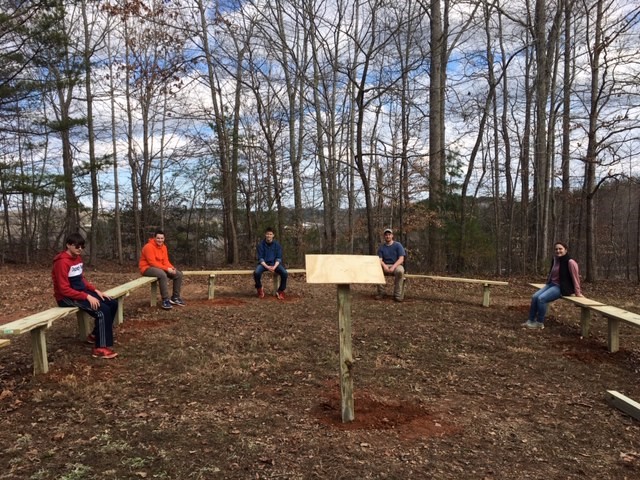 Thanks to a grant from the Polk County Community Foundation, an outdoor classroom is nearing completion at Polk County Early College.

The project began more than a year ago, in April 2019, whem the Community Foundation awarded a grant to PCEC for a project entitled “Project Unplugged and Outdoors.” The idea originated in an English writing course, and students in that course planned the project and collectively wrote the grant.

The construction of the outdoor classroom and green space has been a school-wide effort. Benches and a podium were built and picnic tables were purchased as part of the project so that students are able to have class outdoors as well as study and eat during lunch and study periods. A badminton/volleyball net was also included in order to promote physical fitness.

With the project almost completed, students can go outside to relax and enjoy nature in the green space while leaving more modern technologies indoors.

In addition, the Early College has added two raised garden beds, one with flowers and the other for edible greens such as spinach and other leafy greens. The school also planted four dogwood trees to beautify the area while celebrating the state flower. A garden club has also been created by students in order to maintain the outdoor area.

There will also be a mural painted by a recent graduate of the Early College, and numerous stepping stones have been painted by current students. There will be a plaque in the green space recognizing the Polk County Community Foundation for the grant as well as acknowledgement on the school’s website.