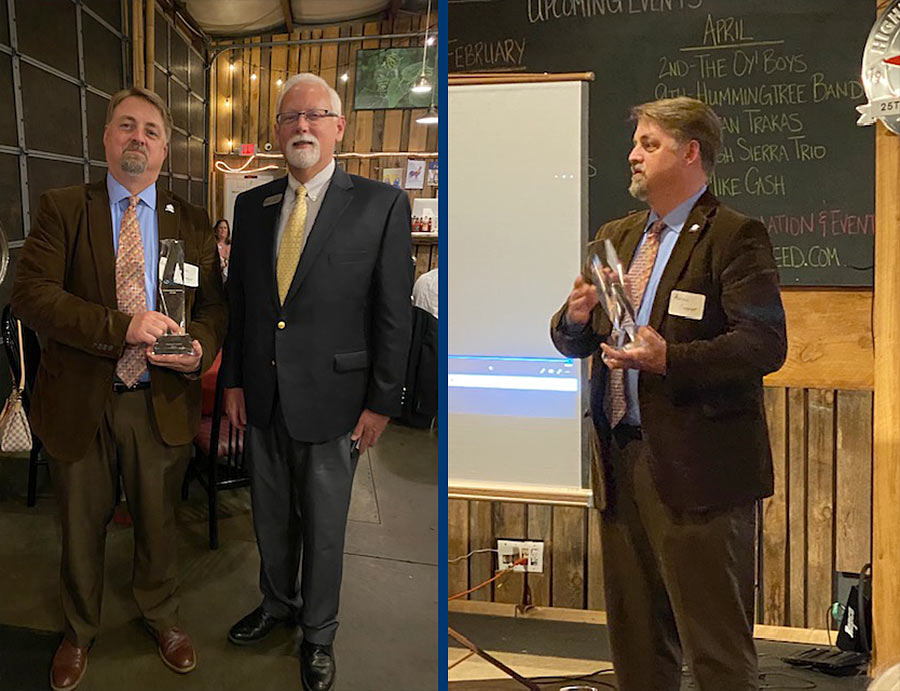 Polk County Schools Superintendent Aaron Greene has spent the past two years shepherding the district through the impact of the global coronavirus pandemic.

For school families, Greene became the voice of COVID-19, offering information about the pandemic in regular informational phone calls, each typically ended with the uplifting thought, “better days are ahead.”

What families and others around Polk County didn’t see, though, was Greene’s involvement in many other areas of the battle against COVID-19, working with Polk County Local Government and Polk County Health and Human Services to make certain that county residents were being cared for, that resources were available to those in need.

Members of the Carolina Foothills Chamber of Commerce took note of Greene’s efforts, though, and the organization recognized Greene as its Citizen of the Year during the Chamber’s Annual Dinner held March 29 at The Rural Seed Restaurant in Columbus.

“Recipients of the award help foster a culture of citizenship and service that acts as a catalyst for others to become involved in civic and social activities,” said Duke Energy’s Craig DeBrew in announcing Greene’s selection.

“The person receiving this award tonight has dedicated 27 years to education here in Polk County, teaching math, then as an assistant principal, director of curriculum and instruction and on to his current position as superintendent.

“During this time of unprecedented confusion, fear and anxiety, his colleagues were reassured by his ability to remain positive and confident even in the early stages of the pandemic. One colleague said, ‘He provides a stable and uplifitng force that has helped to carry the district through some of the toughest challenges it has ever faced.’

“Not only has he worked behind the scenes on many fronts, but he was also seen volunteering at the Tryon Equestrian Center, directing traffic for our EMS workers when vaccinations were being given. His dedication to the children and families of Polk County is truly exceptional.”

Greene is in his sixth year serving as Polk County’s superintendent.