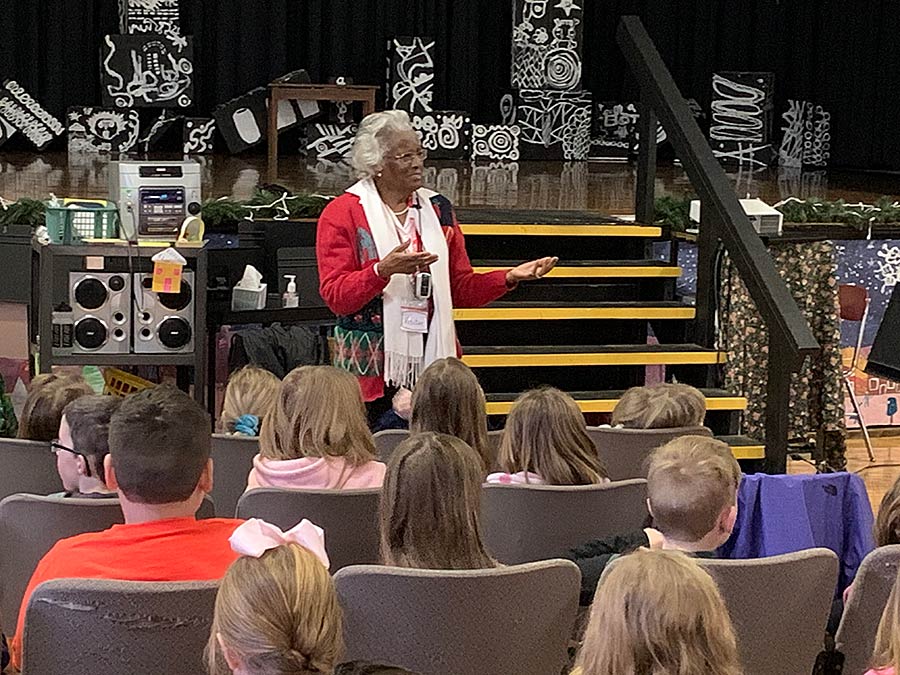 Pearlie Harris visited Saluda Elementary School on March 3 as a kickoff to Women’s History Month. She spoke to a group of first, second, third and fifth grade students in the school auditorium.

After growing up in Saluda, Harris earned her undergraduate degree at Barber Scotia College and a Master’s degree in education from Furman University. She touched the lives of countless children through her 37-year career in Greenville County Schools. She was one of a few African-American teachers in Greenville County Schools who were selected to teach at all-white schools before the district officially integrated.

The Center for Breast Health at Bon Secours St. Francis Health System is named in honor of Harris for her endless dedication to making a difference and extending her personal mission of faith, hope and help to those in need. She served as Chair of the Board of Directors for St. Francis Health System – the first African-American and the first woman to serve in that role.

Harris is a member of the Catholic Fellowship and the South Carolina Council of Catholic Women Historians and was named the 2010 South Carolina State Catholic Woman of the Year. In 2019, she was named the Martin Luther King Jr. Citizenship Award Winner by the Alpha Phi Alpha Greenville Foundation, Inc. She was also honored last year as the Grand Marshall of Saluda’s 2019 Coon Dog Day Parade.

Harris currently serves on the Board of Directors for seven non-profit organizations in Greenville. This was her fourth time speaking with students at Saluda Elementary and she has promised to come again next year.