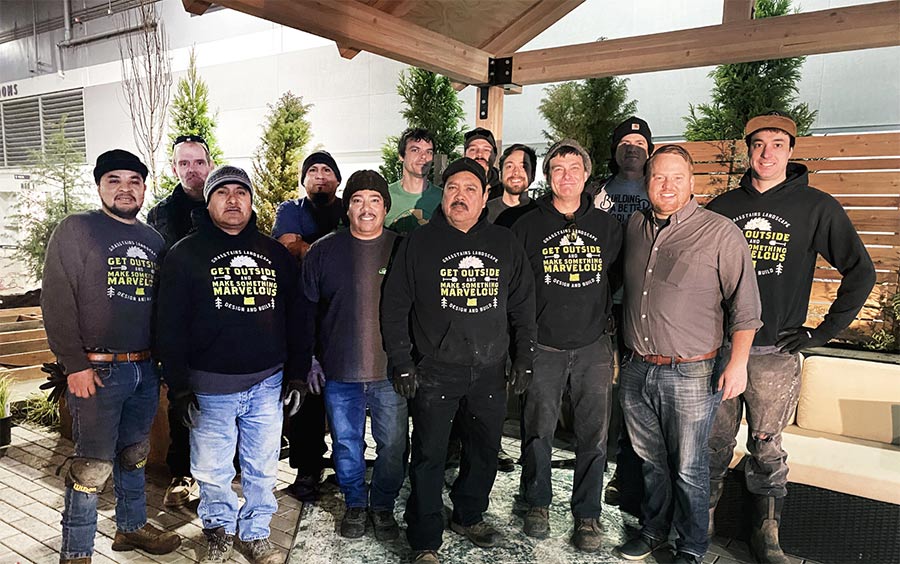 Matthew Holt, far right, and his team at Grasstains in Portland, Ore.

Editor’s note: As part of National FFA Week, 2005 Polk County High graduate Matthew Holt shared his thoughts on how being in FFA helped shape his future.

There will be times in one’s life you’re so close to something it will be hard at first to see the true value of something. Polk County is a place where young people get to experience independence and try new things, but also holds them accountable with a watchful eye (as most of the neighbors are aware of our actions). Over time as I have moved away, I have found that the education, support and opportunity are all uniquely bountiful and diverse in such a small, tight-knit community nestled into the foothills of the Blue Ridge Mountains.

Attending Polk County High School, I did not have much direction as a freshman about my future plans. I remember asking my mother, Ginger Holt – a long-time educator within Polk County Schools – why some students got to work outside mowing and pruning trees during school hours. Her response was that I needed to go talk to Mr. (Chauncey) Barber and ask about his horticulture program. This simple question would open a world of opportunity for me.

One would not at first imagine Polk County to be an opportune environment for exposure to higher education, countless vocations and unlimited opportunity to advance in a career, but that is precisely the experience I had growing up. When I spoke to Mr. Barber, he encouraged me to enroll for his Hort101 course. Not having much of an interest previously, I remember being nervous about taking this class. Like many things in Polk County, we have some unique advantages some might not often see at first. Such was Mr. Barber’s course, which not only exposed me to horticulture and plant propagation, but more importantly led me to involvement with the FFA organization.

Not only do most small communities across America not enjoy the vocational programs offered at Polk County High, where we had opportunities in agriculture, horticulture, drafting and computer science, but we also have a unique and passionate leader in Mr. Barber. It’s the leaders like Mr. Barber who go beyond teaching and instruction to engage and expand the opportunities and exposure for young people. One such opportunity for me was with the FFA.

Mr. Barber would always encourage and bring people together with the use of the FFA. I distinctly remember students of all backgrounds not only being encouraged to take part of FFA, but also to take on leadership roles within the organization, such as State Camp, competitions or other learning opportunities. Having such a great organization like FFA is not only unique within a small community, but also to have a passionate leader such as Mr. Barber in the community who goes above and beyond his duties within the classroom leads to engagement, expansion and exposure of opportunities for young people.

FFA taught me a lot. I know some of you, like I did many years ago, looked at those 3 letters strangely while making the sound “MOOO.”. And, yes, FFA once stood for the “Future Farmers of America” because the program was based in agricultural education some 92 years ago. But it has grown so much since then – now it has vastly expanded to encompass competitions ranging from prepared public speaking, veterinary science, marketing, forestry, floriculture, environmental science, agronomy, communications and so much more.

Somewhere along the way during my sophomore year, I began to be more and more involved with the FFA through small outings, and somehow over time I was convinced to enter a competition. After some encouragement from Mr. Barber, I found myself engaged with both the FFA and ready to compete in my first competition: Extemporaneous Speaking (do not worry if you do not know what that is, I did not at first either). I felt confident at first. Growing up I played just about every sport one could imagine, and I considered myself well-versed in competition, so naturally I assumed I would handle the FFA competition well and, of course, place highly amongst the competition.

So off we went as a group of classmates to a regional competition traveling by activity bus, somewhere up I-26 to a local high school. Before I knew it, I was placed in a closed room with just me and almost 25 topic-labeled postcards on a table. “Ready, Go!” I was told, and I had to select one of these cards. Then I had only 15 minutes to prepare a speech, which I would deliver immediately to a panel of four teachers in the next room. In a hurry, I began to write when, before I knew it, I was instructed I had five minutes left and my stomach dropped while my brow perspired.

My topic was “The Benefits and Downfalls of Urban and Suburban Farming.” To this day, I will never forget that topic, nor the definition of urban and suburban as I miserably failed to define on that day.

As I finished my final notes and made my way up to deliver the speech, I realized I had no idea of the difference between “urban” and “suburban”. While I stood in front of a panel, I fumbled through the definition of each word for what felt like hours as the panel stared back at me. So, as I fundamentally did not remember the difference between “urban” and “suburban” and rambled on, I did as poorly as one could do while presenting a speech. I busted out of the room at the end of the 10-minute speech distraught at how poorly I had performed. I had never failed like that before in a competition, and never faced so much humiliation. I was disappointed in myself and my preparation. The results later came, and I had failed to even place, finishing dead last.

So on went the year, and many opportunities came as the FFA continued. It was ultimately a great experience as I got to do things like attend the Regional Fair and summer FFA camp on a lake in Eastern North Carolina. I got to meet students from across the state from other FFA programs and talk to them about their plans for education and future career.

Before I knew it, my junior year had rolled around and the same event, “Extemporaneous Speaking”, at the regional level was here again. I was encouraged by Mr. Barber and additionally, my father Tom Holt, who both knew of my previous year’s failure, to speak “extemporaneously,” to compete again. Somehow with a mix of bravado and bribery, they were able to convince me to once again compete. The key is, they would not let me give up and they wanted to see me try again at something I had failed terribly at the first time. I was not so eager – I remember thinking, what is going to change this time? But Mr. Barber, my mother, father and others were there to help prepare me. I practiced and studied multiple topics that we thought could be presented, and I learned new methods and ways to organize my thoughts so I could prepare a speech more quickly.

It is funny because I do not actually remember what the topic or the speech was in that regional round that year, but regardless, I found success. I won the regionals, which afforded me the opportunity to go onto the next level at the state competition hosted that year at North Carolina State University. This was a pretty big opportunity, as little did I know, it would expose me to my future alma mater.

In short, FFA helped me in numerous ways with exposure to places throughout the state and by introducing me to far more than agriculture; I was pushed and encouraged to learn new skills such as being able to prepare a speech on the fly and present with confidence. It’s a skill I would soon be routinely using at the college of Design at N.C. State in a few years. Still, today, extemporaneous speaking is something I use daily in sales and design presentations with clients.

I went on to attend North Carolina State University and complete a degree in Landscape Architecture, and I now fill my days running Grasstains, a small landscape construction company based out of Portland, Ore. I manage 14 employees, and we all work to transform outdoor spaces for residential and commercial clients.

It was not until recently I discovered just how incredible a community and an education system I was surrounded by. The opportunities, such as FFA, that we have at Polk County High School are unique and should be fostered by the community. I know most certainly that my time spent with Mr. Barber and the many other great mentors and teachers at Polk County were as important and integral to my growth and future achievements as any.

I may have never stumbled across my career had it not been for the FFA and Mr. Barber’s horticulture class, as well as that simple question to my mom wondering how those kids got to mow grass outside during school hours.

Now, I get to create something marvelous and play every day.