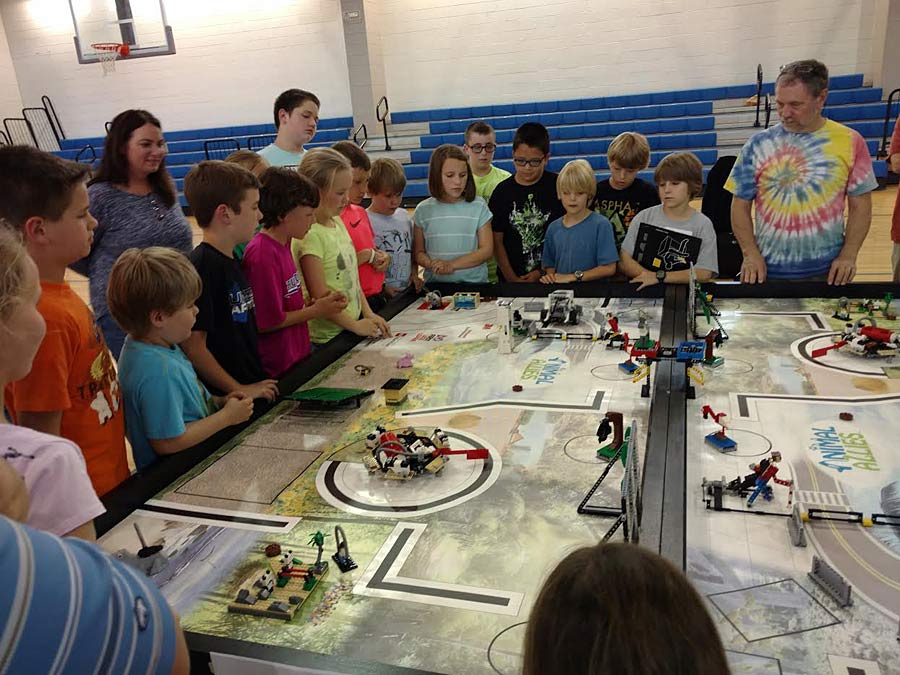 A new program that brought Lego League robotics teams to all Polk County elementary schools and Polk County Middle School this year will culminate Saturday in the crowning of the first Carolina Isobots Regional Champion.

Thirty-six teams from Polk, Rutherford and Spartanburg counties will be in action Saturday at Isothermal Community College in Spindale, wrapping up the first season of the competition between the FIRST Lego League robotics teams. The event, which is open to the public beginning at 1 p.m., marks the end of a process that began in January, when Carolina Isobots kicked off the rookie season for the teams.

“We believe our Lego Robotics program engages students beyond the classroom and is an outstanding way for them to apply what they are learning and to develop the critical thinking, communication, and collaborative skills that will serve them well as they progress in education and life” said Polk County Schools Superintendent Aaron Greene.

“We are excited Polk County Schools is a part of the Carolina Isobots initiative and will be participating in the regional competition this Saturday. We are fortunate to have many community members and partners who have supported this endeavor.”

The 36 teams, representing Polk County, Rutherford County and Spartanburg County School District Two, will be competing for honors in four areas of competition. The team with the best overall performance in both the judging sessions and robotics competition will be named the Carolina Isobots regional champ.

The season began with the first event in January. At that kickoff, teams were given a mat filled with 11 challenging robot missions. The teams were armed with more than 1,200 Lego parts and pieces, a robot brain and a variety of sensors. Teams were challenged to develop a game strategy to score as many points as possible by having their robots complete as many missions as possible in 2 ½ minutes. Then they envisioned the robot design that would allow them to complete those missions. They developed a program that allowed the robot to autonomously move around the board completing the missions. For 12 weeks they were constantly testing and refining their robot and program.

During the next round of scrimmages in early March, teams were judged in three additional areas: Robot Design, Research Project and FIRST Lego League Core Values. Each team had five minutes to present the unique aspects of their robot design. The judges then had five minutes to ask the team questions.

Teams also completed a research project that led them to identify a problem or opportunity related to this year’s theme: Animal Allies. Teams review the research on what has been done in their chosen area and propose how they would solve the problem. Finally, they are judged on FIRST Lego League Core Values, which focus on teamwork and creating a high functioning team.