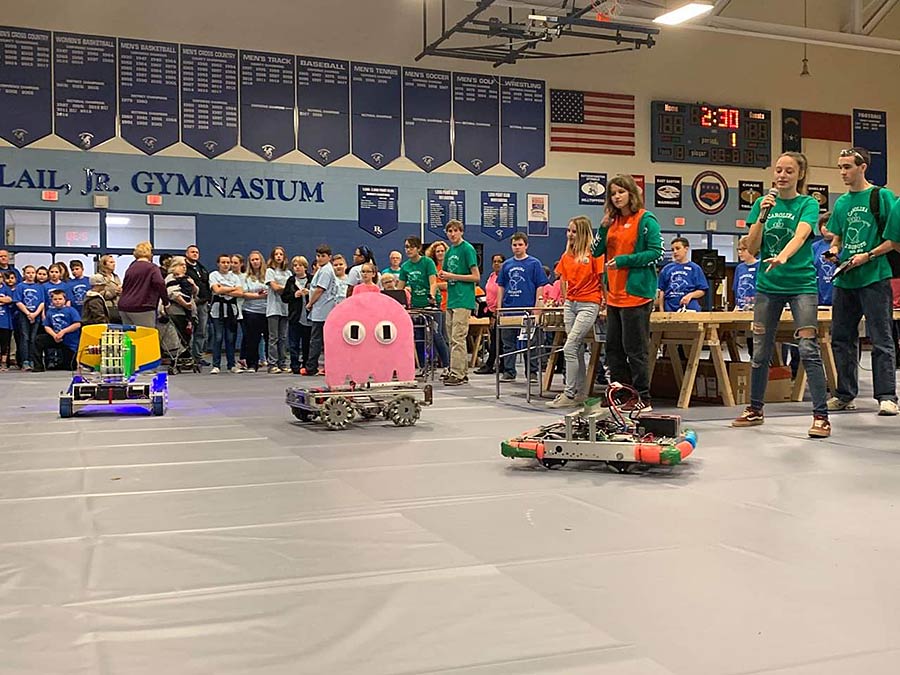 Some of the brightest young minds in Polk County recently matched wits with students from Rutherford and Spartanburg counties in the 3rd Annual Carolina Isobots Regional Competition at R-S Central High School.

Elementary school teams from Polk Central, Tryon, Saluda and a team from Polk County Middle took part in the event, during which almost 40 teams competed in a variety of tasks specified through the FIRST LEGO program.

FIRST LEGO League is a national robotics program for 9-14-year-old students designed to get them excited about STEM and teach them valuable employment and life skills. During the season, teams meet weekly to build and test their robots and to prepare the project and presentation elements of competition. Local business and community leaders are encouraged to become mentors by working directly with teams to share their experience and by helping to shape hands-on learning experiences that reach students beyond the classroom.

Throughout the year, FIRST LEGO League teams from elementary and middle schools learn about programing a robot using LEGO MINDSTORMS technology, completing complex missions on a challenge mat, and collaborating to research and solve a real-world problem related to the challenge.

Polk County Schools students spent the past several months working to complete given missions by designing and programing their Lego robot and working together to complete a project connecting this year’s Space theme to real-world issues and topics. While each team has a coach to offer guidance, the students design, build and program the robot themselves as well as collaborate to create their own project idea, problem and solution.

At the competition students were judged on their robot design, their project and the FIRST LEGO League core values. The students alone represent their teams during the judging sessions where coaches and team volunteers are not allowed. Teams are also scored on their robot run, where they have three attempts, each lasting two and a half minutes, for their robot to complete as many of the given missions as possible.

The Orange Justice team from Tryon and the W.C. Bots from Saluda both scored in the top 10 of 36 teams on their robot run. The W.C. Bots also won the overall Project Award for Innovative Solution.