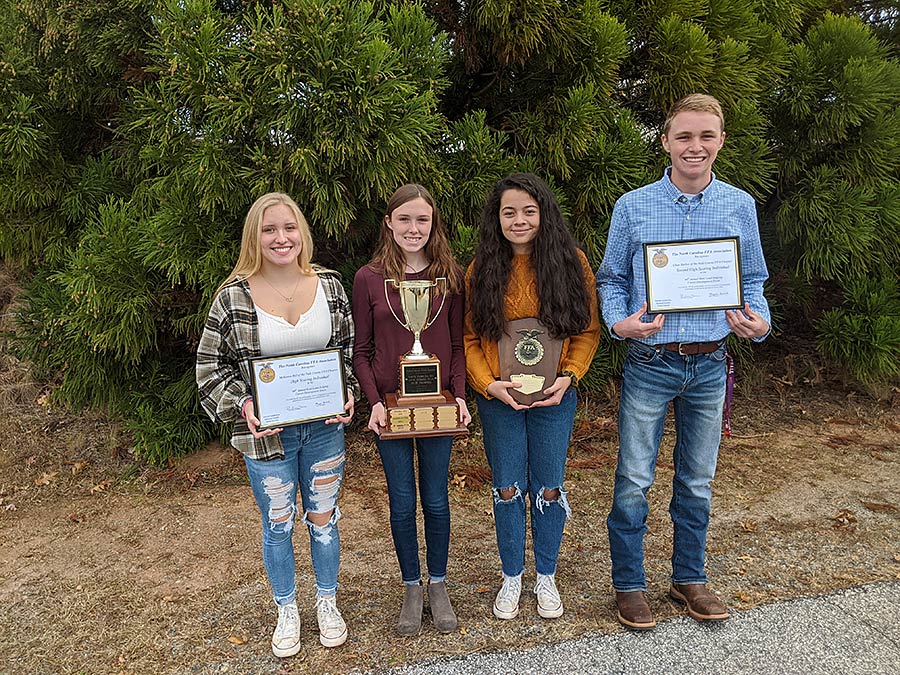 The team took top honors at the 66th Annual North Carolina FFA Association Land Judging Career Development Event, held in mid-November in Ashe County. The youngest team in school history to win a state championship, it marks the fourth state title for the Polk FFA program and earned the team a trip to the National Land and Range Competition in May in Oklahoma City.

The win came after a six-week period that hadn’t too friendly to the Senior Team, which placed second to Madison High School at the Swain County Land Judging Invitational and the Tuscola High School Invitational Land Judging competitions. The runner-up finishes provided some incentive to the team.

“The Monday after we had competed in the Tuscola competition, the team unexpectedly showed up to my 9:30 a.m. Smart Period and wanted to practice,” said Polk County Agriculture Education teacher Chauncey Barber. “From that day on they have been dialed in and had a goal to be one of the best teams ever. (The state meet) was an unbelievable day. We had the first (Mckenna Hill) and second (Chan Barber) highest individuals as well as the seventh (Katie Campuzano-Gomez) and ninth (Lacey Gosnell) places.”

“I do not want to sound partial because my son is on the team, but this group is very competitive with each other and truly care about helping each other.”

“We always want to win state, but our number one goal is to try to get every kid who participates the chance to go to nationals,” Barber said. “Just really proud and thankful to have great students and a lot of community support. I really believe these experiences outside of school give students an advantage on down the road in life that cannot be measured by a test! My old Agricultural Education teacher, Richard Smith, and I look forward to taking this group to nationals.”

In early April 1955, 188 FFA members met on a parcel of land in Harnett County near Dunn, where Interstate 95 was being constructed. It was on this site that the first “Soil Appreciation and Soil Judging School” was held. Sixty-four years later, hundreds of FFA members from across the state traveled to Ashe County to participate in the year’s competition.

This event encourages students in grades 7-12 to analyze land characteristics such as soil type, erosion and drainage to determine the best possible use. Knowledge about soils can be organized and applied in managing farms, fields, and woodlands, developing communities as well as engineering work. Students are able to comprehend why soils respond differently to management practices and how soil properties affect crop growth and urban uses as well as environmental concerns.