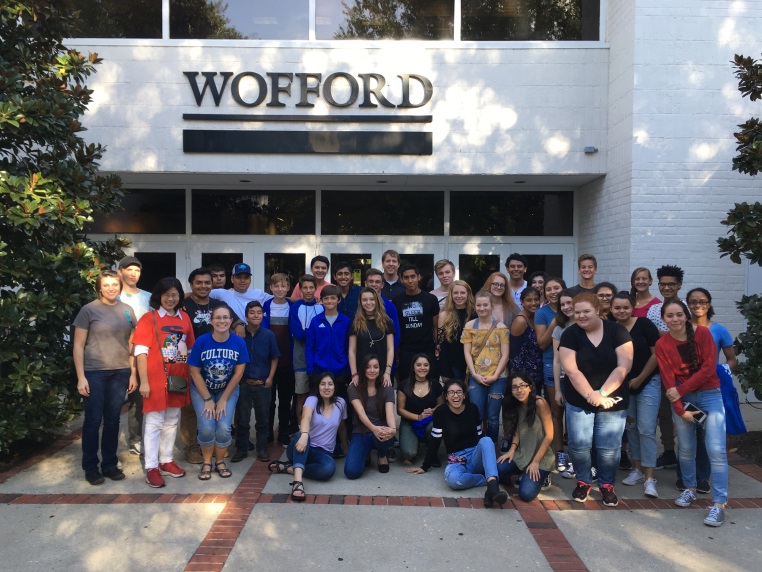 The group watched a Chinese movie called “Touch of the Light,” a very interesting movie that highlighted similar struggles and triumphs for youth across cultures and across the world. They then ate delicious Chinese food and traditional mooncakes for dessert.

Students played Jianzi (a shuttlecock game that is similar to hacky sack), Chinese chess and did some painting. A Wofford student also took them on a campus tour where they got a private viewing of the current art galleries on display in their new building.

In order to provide such a different cultural experience for the students, Polk County High School Mandarin Chinese teacher Qiaoying Lou planned this trip (and made the mooncakes) with Yongfang Zhang, who works at Wofford College, at the beginning of September. Lou also collaborated with Rachel Hall, the director of the school’s foreign language department and Culture Club sponsor, to make this trip a reality.

PCHS math teacher Jon Ezell drove the bus for the group and Spanish teacher Brittany Gilbert served as a chaperone.

The students’ comments after the trip were very positive and reflected their appreciation for such a cultural experience. Many of them liked the movie, thought the food was delicious and appreciated the opportunity to learn about Wofford as a college possibility. Some students had not considered college before, and hearing from the college financial aid staff, the study-abroad representative and the internship coordinator helped them understand some basic information about achieving their future goals through attending college.

Below is some student feedback:

“I loved eating the Chinese dishes as well! They had a bunch of delicious Chinese candies to try. Eating at the Pavilion was nice, too! The weather was perfect and I enjoyed spending time with my friends there.” –Sadie Allen

“I liked being able to do the activities we wanted to. I thought it was really fun when there was a big game of Jianzi. It was great to have everyone involved.” –Madelyn Scarlett

“While at the museum, I saw two tapestries like written out drawings. One was written in old Chinese calligraphy and the other in modern Chinese. I was surprised when I could read characters from the tapestries.” –Israel Román

“My favorite part was probably playing Jianzi because we got to play with lots of people. I also liked trying foods I have never tried before like mooncakes.” –Chase Scarlett

“I ate so much my belly hurt!” –Jhoana Cera González

“The food and the Jianzi game was great!” –Noah Foy

“I enjoyed everything. The movie was lovely and the food was good.” –Kevin Hernández