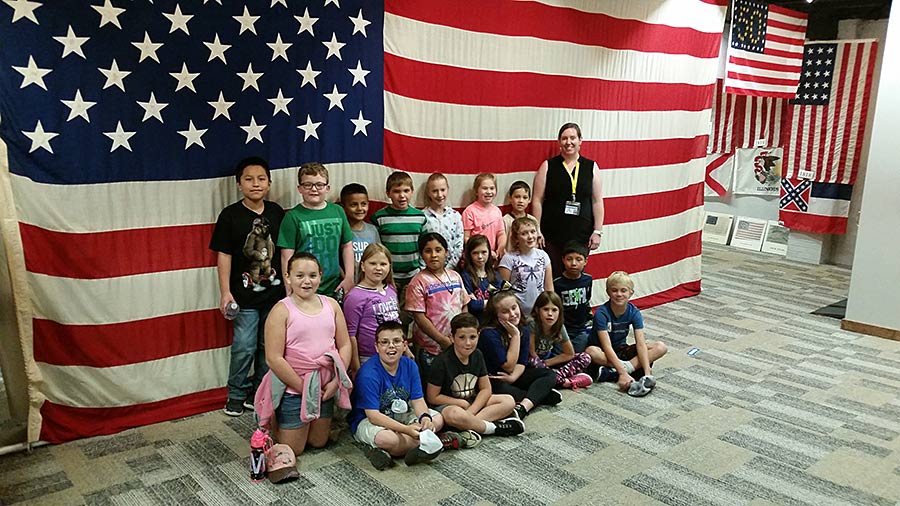 Preparing to teach that material, Polk Central third grade teacher Julia Tackett saw an opportunity to provide her students with a firsthand look at local history while also giving them a new appreciation for their community.

Tackett’s class spent part of a recent day in Columbus touring the House of Flags, Polk County Courthouse and Polk County Historical Museum, enjoying an opportunity to learn more about each venue and the history detailed inside.

“By visiting these local fixtures, this was our introduction into our local community,” Tackett said. “Students were able to view historical sources including artifacts, pictures and documents that offer evidence of what happened in the past. We used this visit as an activator for students’ knowledge.”

Students were able to hear from local experts such as Robert Williamson, John Vining, George Comparetto and Pat McCool at the venues, each taking time to provide detailed information about the exhibits at each venue and their connection to Polk County’s past.

“The students were intrigued with all the history in Columbus,” Tackett said. “It was amazing to see their enthusiasm for each of the places that we visited. At the museum, they loved seeing all of the old artifacts and models. There were shouts of ‘awesome’ and ‘look at this!’ It sparked their curiosity and questions about items just started to flow.

“At the Courthouse, after learning about where the exterior bricks came from and connecting to the time period of when it was built, many questions were voiced about how were (workers) able to build this building without machines. Their curiosity was answered by John Vining and showing and telling them about how they constructed the building using scaffolding and you can still see the squares in the bricks from where it was attached.

“At the House of Flags, students were entranced by the different flags. They were able to spot certain parts about each flag and ask questions. They were really amazed in the United States room where there is a giant American Flag hanging. They also learned that there was an American flag twice as big folded up ready to be worked from the (Tryon International) Equestrian Center. They couldn’t believe that there was a bigger flag than what they were seeing.

“They loved hearing the history of the colors, stripes and stars. They also paid particular attention to how to handle the American flag with respect and were very quick to let Mr. Williamson know that he let a flag brush the ground. He smiled and was very glad that the students were paying such attention to that detail.”

That attention to detail helped show the value of the trip, which no doubt will have a lasting impact beyond the current unit.

“Students are able to take away an experience that was able to spark their curiosity and create a desire to learn more,” Tackett said. “Students are able to make connections to their learning because they have a visual in their head. Being able to see history and not just read about it makes our history continue on. It also creates a sense of pride and community that we are instilling in our young students to help carry on the traditions of Polk County and to hopefully create new traditions.

“This trip also made students want to take their families to see these places. I heard a lot of students say that they were going to come back to the Museum with their parents so that they had more time to look around.”