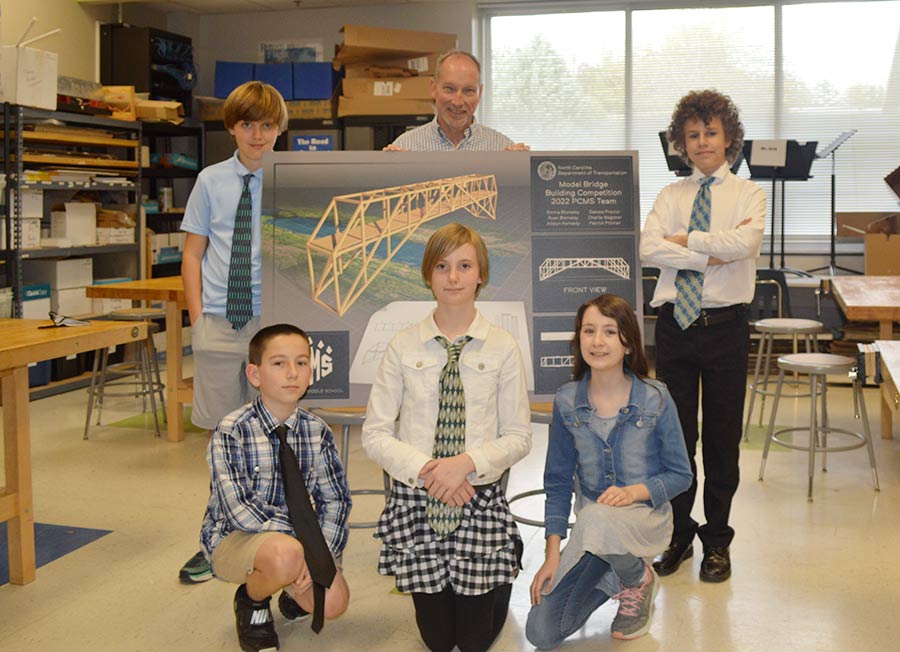 The North Carolina Department of Transportation’s Model Bridge Building Competition returned in April after a two-year hiatus due to the coronavirus pandemic.

PCMS added to its legacy at the bridge building competition, winning the 2022 event for the school’s fourth state model bridge championship.

The competition on April 29 did differ from past events in that it was held virtually rather than at NCDOT headquarters in Raleigh. But the format of the competition remained the same – a written report, a skit, a review of bridge plans and model bridge weight testing.

For the competition, the team’s report included elements on bridge history and styles, bridge terminology and a review of their bridge model. The skit is limited to seven minutes in length and must dramatically showcase the bridge and the bridge report; the PCMS skit took on the form of a presidential debate where each team member represented one type of bridge touting its strengths and weaknesses.

The final and most exciting part of the competition was the weight testing and plan review. During weight testing, DOT engineers attach an empty bucket to the bridge and slowly began filling it with sand until it collapsed.

Each bridge model had to have a 20-inch clear span with three inches of clearance below the bridge deck, have a two-inch wide roadway and weigh less than 30 grams. The PCMS bridge was a truss bridge that met each of the requirements.

The PCMS bridge held 15.18 pounds of sand before collapsing, scoring a 229-point efficiency rating, meaning it held 229 times its dead weight of 30 grams.

The competition is sponsored by the NCDOT in partnership with Carolinas Associated General Contractors and the American Council of Engineering Companies of North Carolina. Prize money will be awarded to PCMS to continue the bridge building team.

“The team would like to send a special thank you to Buildz, located in Forest City, for making copies of our bridge plans in large scale and for creating a large poster of our bridge model which will be proudly posted at the school,” said PCMS team sponsor Dale Rush.