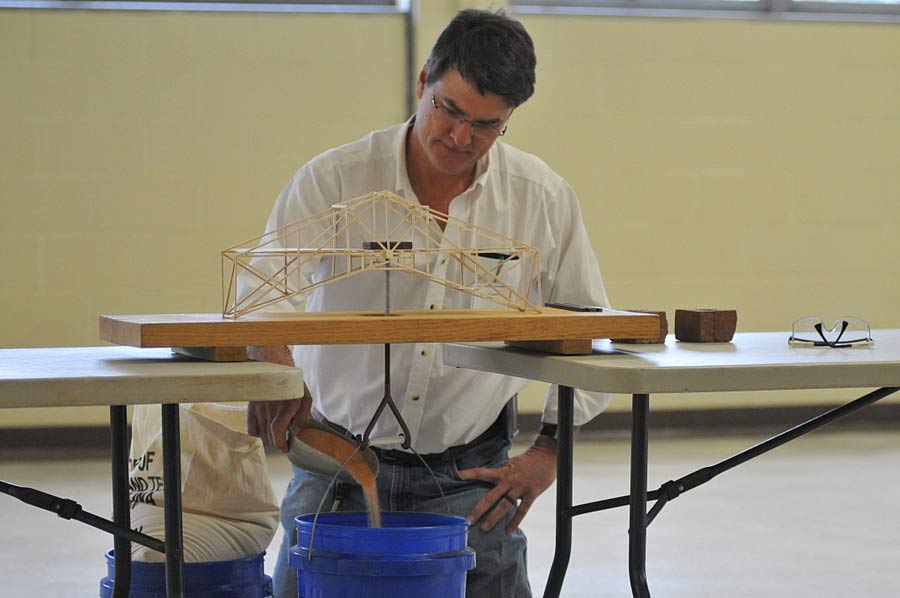 Shortly before engineers from the North Carolina Department of Transportation and other firms associated with the NCDOT tested the strength of each team’s bridge, a faculty adviser from Piedmont Open IB Middle School in Charlotte stood before competitors and guests and praised Polk County’s three entries in the competition for their excellence, their teamwork and their openness in talking with members of the Piedmont IB team, attending the competition for the first time.

Piedmont could pick no better role model for the event than teams from Polk County, who continued their domination of the regional tournament. Polk County Middle emerged as regional champion for the fifth straight year, with Polk County Early College winning its second straight regional title and Polk County High School finishing as regional runner-up.

Teams entered in the event, held at Collett Street Recreation Center in Morganton, competed in four phases – a written report, an oral presentation, a detailed blueprint drawing of their bridge design and the weight-bearing test of the bridge. Students design and build the model bridges.

“This is just our second year competing,” said Linda Sutton, who coached the Polk County Early College team. “We have to give so much credit to Robert Frost for all of his help.”

Indeed, the PCEC entry bore a small label honoring Frost on its bridge.

The winning teams qualified for the state competition in late April, when the four regional champions will meet in Raleigh to determine the state’s best model bridge builders.