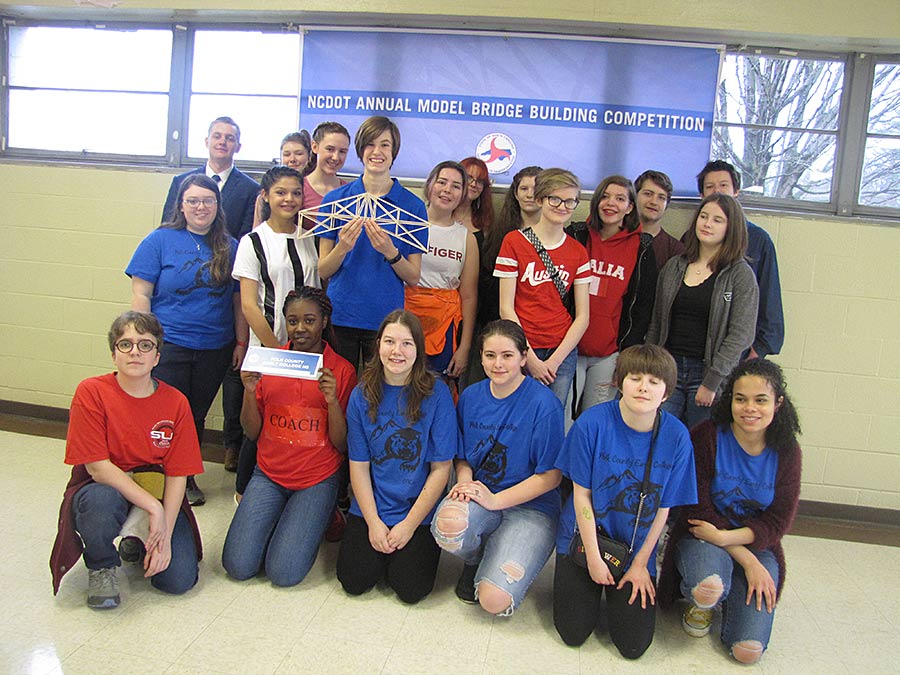 Once again, Polk County Early College and Polk County Middle School are bound for a statewide test of their model bridge building skills.

The two Polk Couny schools each captured the Region 4 championship, earning a spot in the state competition. Both schools are the defending state champion at their respective levels.

The challenge was hosted in these four regional locations:

Region 1 in Kinston, with the winning students from West Craven Middle School and Whiteville High School.

Region 2 in Raleigh, and its victors were from NC-MSEN Middle School and Franklin Academy High School.

Region 3 was held in Asheboro, where the winners were from Highfalls Middle School.

The student teams’ designs adhered to specific structural guidelines, including having a minimum clearance span of 20 inches, weighing no more than 30 grams, and being made of balsa wood.

On Friday during the regional competitions, the teams carefully displayed their creations on tables prior to the performance and judging sessions. Groups then gathered onstage to describe their varying strucutral strategies to the audience. To test the sturdiness of the students’ handiwork, judges suspended a bucket under each bridge and added sand, one scoopful at a time.

The bridges that could withstand the largest amounts of sand won the competition. A winner was chosen from a middle school and a high school at each regional event.

As noted on the DOT’s website, “Since 2000, NCDOT – in partnership with Carolinas Associated General Contractors and the American Council of Engineering Companies of North Carolina – has hosted the statewide Model Bridge Building Competition to encourage students to develop math and science skills that are used in transportation, construction and engineering careers.”

“This competition is always an exciting opportunity for students to demonstrate the power of teamwork and creativity,” said Sterling Johnson, the NCDOT coordinator of the Model Bridge Competition.

The winning teams will compete again on Friday April 26 at the final statewide competition. The event will take place at the NCDOT’s Transportation Building in downtown Raleigh.