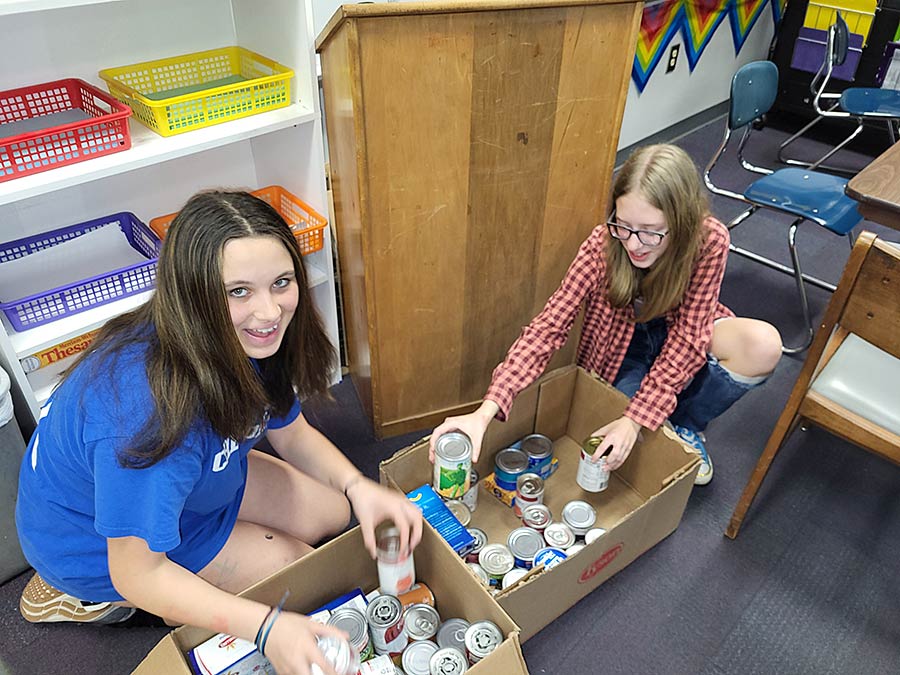 MANNA recently announced its 13th Annual Student Food Drive, taking place during March. During the Food Drive, schools host local food drives and compete with each other to see who can donate the most pounds of food to MANNA or their local partner agency.

Polk County Middle School held a competition during the week of March 7 to see which of the school’s three grades could contribute the most food to the drive. Principal Todd Murphy heightened interest in the competition by announcing that the grand prize for the grade that won would be a special fun Friday plus the school’s coveted spirit stick, currently held by the sixth grade.

By Thursday of the week, some 2,000 items of food had been collected. As Friday dawned, cans and goods arrived by the boxes, and students collected more than 5,000 items for the week. This amount is equivalent to 1,806 pounds of food and $3,071.22.

The theme for the week was Hoops for Hunger. As an incentive for bringing in items, students were invited to watch a basketball game matching the school’s boys and girls basketball teams against PCMS staff members. PCMS staff claimed a 26-14 victory.

“Coach Michelle Fagan pulled off perhaps the greatest victory in her coaching career, managing the staff team, with an average age of 43, to a surprising upset over a strong group of eighth grade athletes,” said Matthew Russell, PCMS eighth grade social studies teacher and staff basketball team recruiter. “Despite not having a single practice leading up to the game, she put all of her players in a position to succeed, and watched proudly from the bench as her team stretched out their lead to double digits in the closing minutes of the game.

“The MVP award was given to sixth grade math teacher Jamie Graber, who led the way for the staff with strong play in the post. She scored eight points, grabbed six rebounds and smothered the opposing students while on defense.”

At the end of game, Murphy announced that the eighth grade had won the food drive competition with 2,287 items. Elisa Flynn, eighth grade science teacher, had the most in her homeroom with 790 items.

The eighth grade celebrated with the PCMS spirit stick and will have a special fun Friday in the coming weeks for its victory.