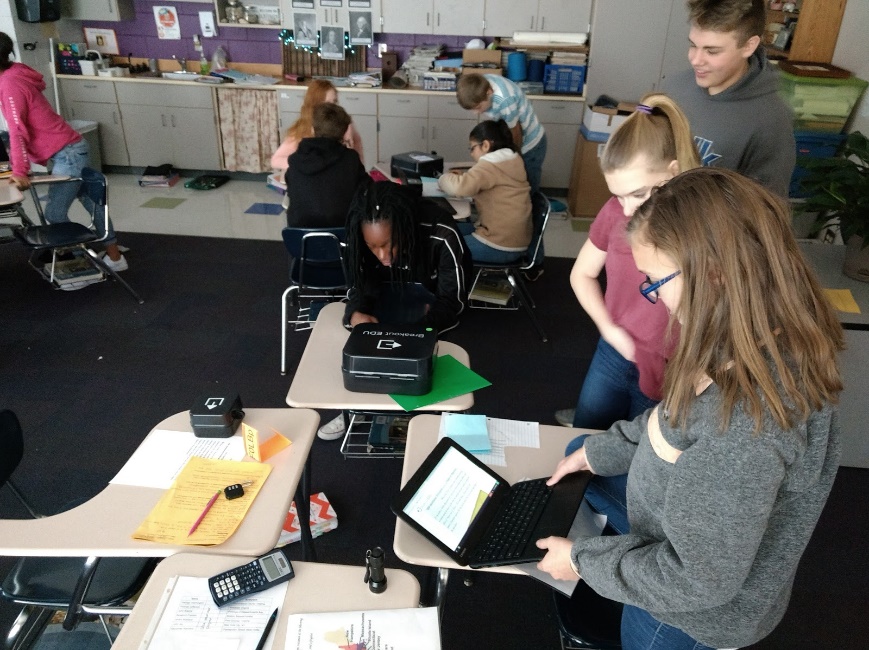 If you were to visit Eric Eaton or Matthew Russell’s social studies classrooms at Polk County Middle School recently, you would think you had stepped into a movie about espionage and intrigue or one of the popular “escape rooms.”

The eighth grade North Carolina history teachers have transformed their classrooms into “breakout rooms” with the Breakout EDU program that challenges students to use the “4 Cs” of communication, collaboration, critical thinking and creativity. Through a generous donation by Steve and Melanie Cobb, pharmacists and former owners of Owens Pharmacy in Tryon, Eaton and Russell were able to purchase six Breakout EDU kits to bring this high intensity learning to students.

On this particular day, students were up against the clock to break into a box containing a secret item to help them save the Declaration of Independence and the American Revolution. Students were in teams and placed in a scenario where the Declaration of Independence was unsigned and British soldiers were on their way to arrest the delegates, threatening to end the Revolution before it even got started.

The Breakout EDU experience had them using invisible messages, math calculations, documents and maps to lead them to solutions to unlock five locks and, ultimately, the box with the key item – a quill pen to sign the Declaration.

Students were given 45 minutes to complete multiple tasks such as calculating the total ages on July 4, 1776 of seven of the Founding Fathers. The answer became the combination for a three-digit lock that was one of several locks keeping students from their goal.

Students were challenged to work as a team and to figure out solutions with minimal and sometimes, unique information. One clue on a print of the first United States flag was written in invisible ink requiring students to use UV flashlights to reveal key information.

In the end, several groups succeeded in completing the task, often with just seconds to spare. Those teams who were not successful gained valuable insight into group dynamics and thinking “outside the box.” Many students noted that miscalculations of math problems and not reading clues carefully kept them from unlocking locks. They felt they will use those learning opportunities next time to break the codes successfully.

“At the beginning we were really confused and didn’t know what to do,’ said student McKenna Hill. “We had one lock left, but I think we did pretty good because we worked as a team at the end.”

Several students noted that they realize clear communication with your team members is critical.

“We want to get students more engaged in what we are studying,” Eaton said. “I just ran across the Breakout EDU program in researching high-level student engagement. The Breakout EDU system really engages while challenging students to look at information in unique ways.”

“We’ve been searching for a way to get more buy-in from students in their learning,” Russell said. “We want active learners and students that are engaged from bell to bell. The Breakout EDU system provides something for every type of learner. It truly is inspiring to watch students from different backgrounds and friend groups rally together to achieve a common goal.”

The overwhelming reaction by students has been, “When are we doing this again?” They will get their chance when they soon take on a breakout challenge about the U.S. Constitution and branches of government.

Eaton and Russell hope to train other teachers in using the breakout room concept to engage students across multiple subject areas. Both teachers feel that if students can get this excited about learning and can see how communication and teamwork are critical to success, it is well worth it.