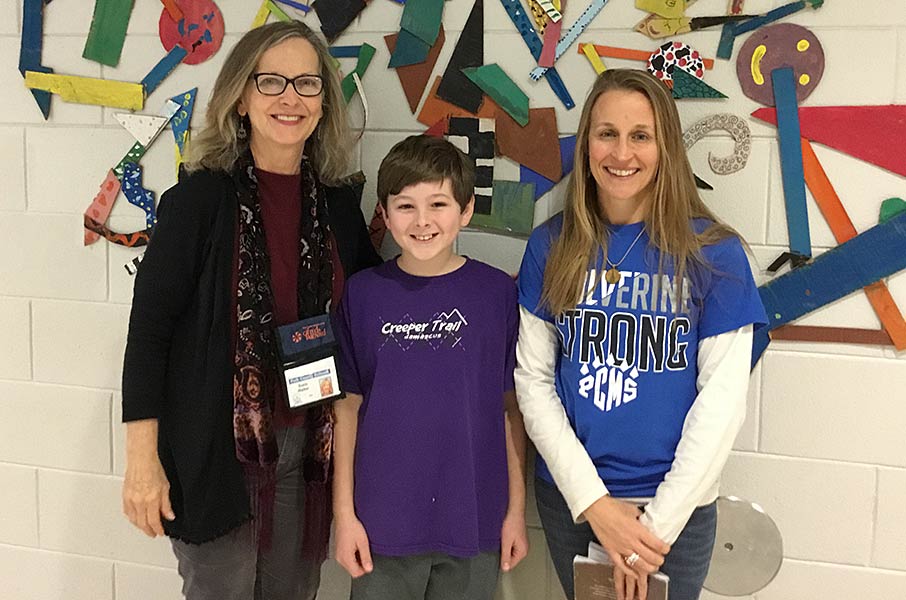 Polk County Middle School sixth grader Neil Rostick has been awarded the Nicholas Green Distinguished Student Award in recognition of his efforts to develop his gifts and talents as well as aid others.

The Nicholas Green Foundation began honoring a deserving student in each state in 2000. Nicholas was a bright seven-year old who was killed in a senseless shooting while on vacation in Italy. His parents wanted to keep his memory alive, and they donated money they had saved for his college expenses to fund this award. Although the money ran out in 2013, donors and sponsors have continued the award.

In nominating Rostick for the ward, Polk County Middle AIG (academically and intellectually gifted) teacher Susie Walker said of Rostick, “His current nature of a community changer bodes well for his future impact as a world changer. Without a doubt, he is a role model for others.”

Rostick is an accomplished mandolin player and member of PacJam, a musical group sponsored by the Tryon Fine Arts Center, whose mission is to preserve the traditional music of the Appalachian culture.

Rostick volunteers each summer to deliver food as a part of the Summer-Feed-a-Kid program. His recipe for sharp white cheddar pimento cheese and homemade muffins are a hit at the local farmers market, and he shares his profit from these products with Paws, Prayers, and Promises. P3 is a local nonprofit organization dedicated to helping animals and their people through humane education and assistance. They also provide foster placements for pets for people facing the end of their lives, until a forever home is found.

Rostick will receive his award in March in Winston-Salem. He plans to split the $250 award between two charities and PCMS English Language Arts teacher Jeanne Ferran, who will buy books for her literature circles.

Rostick wrote the following essay for the award nomination process:

I have to admit, when I first started volunteering for the Summer Feed-A-Kid program with my mom and sister, I wasn’t such a happy camper. While other kids were enjoying summer break, sleeping late and watching TV, I was waking up early to go pack bags of food. It wasn’t really my ideal way to spend the summer. That all changed when we delivered our first bags of food. We drove up to a run down trailer and parked the car. My mom and I both grabbed some bags of food and she knocked on the door. The eldest of the three kids at home answered the door and invited us in. Once inside, I immediately noticed that there was no air conditioning and the children were home alone because their parents were at work. They were sitting on a mattress in the living room watching TV. It was then that I realized how fortunate I was and how these bags were helping others so greatly. This realization made me want to keep volunteering.

This program is important to me because some of the kids receiving the food attend my middle school and some of them are my friends. These kids don’t always have access to food in the summer and this program helps them have food year round. It makes me feel good that I am able to help them. This program taught me valuable skills such as time management and better communication. I’m able to talk to strangers and other people more easily than I could before and I can get tasks done in the amount of time allotted. This even inspired me to start my own business where I could give back to my community.

In addition to the Summer Feed-A-Kid program, I enjoy selling homemade sharp white cheddar pimento cheese and muffins at my local farmers market. Half of the money earned goes to an all volunteer organization called Paws, Prayers, and Promises. Their mission is to help animals and their owners through education about the importance of spaying and neutering pets. P3 also sponsors foster programs for pets whose owners are critically ill or dying. I chose P3 because we adopted a cat named Lola from them. She gives us so much joy and I wanted to give back to them as a way of saying thanks. It’s hard waking up early on Saturdays to sell my goods at the market, and people aren’t always willing to taste free samples from a kid. I never give up and I’m persistent with my selling techniques until the last container of pimento cheese and muffins are sold. To date, I’ve donated about $600 to Paws, Prayers, and Promises.

I don’t know what the future holds for me, but some truths I have come to believe will follow me always. I believe everybody should respect and treat others kindly, no matter where they are from or what they look like. Volunteering in my community has not only taught me to have more respect for others but has also given me a sense of purpose and faith in myself. I realize that lending a helping hand could have a lasting impact on someone’s life. These experiences have given me an interest in business and non-profit organizations and the benefits of a partnership between the two. Perhaps one day I’ll form an organization of my own.