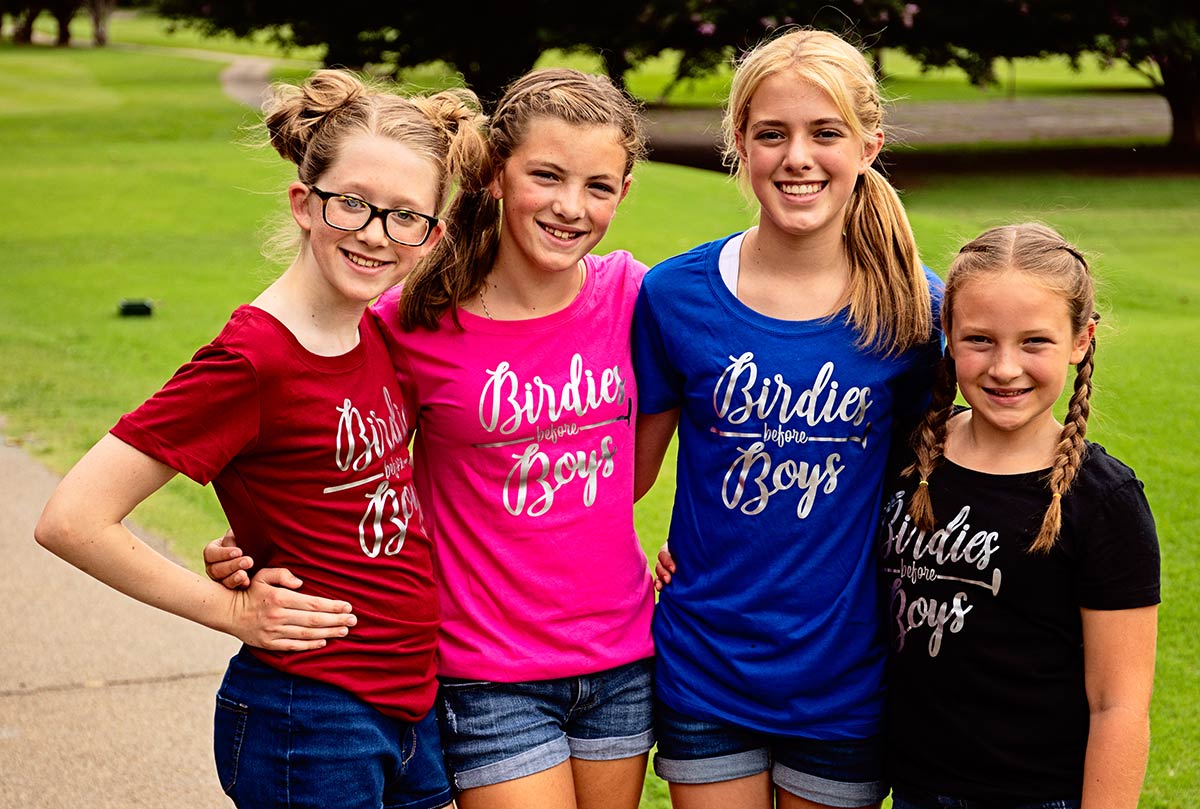 Terrain whizzing by as she made her way to a junior golf tournament, Addie Buss had more than birdies and bogeys occupying her thoughts.

Age nine and a student at Tryon Elementary, Buss had a growing sense of style in addition to her developing golf skills, and that proved a problem – there were few options beyond the standard golf attire to marry those two passions.

She paused her thoughts to express that frustration. Her fellow passengers, all close family members, suggested perhaps that the best way to solve the dilemma would be for Buss herself to fix it.

“So I decided to take it into my own hands and do it,” Buss said.

Some two years later, that discussion has spawned Birdies Before Boys, a golf-theme clothing line designed for women young and old. Inventory at present consists of T-shirts adorned with slogans such as “Peace, Love and Birdies” and “My Scores Are Low But My Standards Are High” as well as a hoodie bearing the business’ namesake slogan.

Birdies Before Boys is far from what you might expect from a pre-teen with an idea. There’s a website, birdiesbeforeboys.com. There’s a Facebook page. There’s a marketing plan.

At the center of it all is Buss, now a sixth grader at Polk County Middle School, who has gotten a first-hand look at the highs and lows of entreprenuership in bringing her vision to reality.

“My mom made me go through all the steps to start a business,” Addie Buss said. “I had to get an LLC, trademark my business name and all the not-so-fun stuff about starting up your own company.”

“She has done a great job doing it, but she had to learn the whole business,” said Lindy Buss, Addie’s mother. “She went through everything to get her LLC. She has trademarked her brand. She has met with people to open her bank accounts and all that kind of stuff.

“It’s been a fun experience, especially while we couldn’t do anything else (during COVID-19 lockdowns).”

Addie Buss had some of her T-shirts in hand by early 2020. And that could have been the end of the story – she could have worn those shirts, gotten a few oohs and aahs at tournaments, called it a day and no one would have expected otherwise.

But dreams rarely fade away slowly, and Addie Buss has plenty of them.

“I just thought that if I wanted fun T-shirts to wear, everyone else would probably like them as well,” Addie Buss said. “Also, I’ve wanted to be a famous fashion designer for as long as I can remember, so this seems like a good first step.”

Addie has been able to lean on her mom for photography for the website as well as some help in launching the business. But the steps taken to get Birdies Before Boys up and running have been far from a “Mom, can you do this?” effort.

“She was nine when she came up with the idea, so the fact that she didn’t give up on it and she just kind of persevered through it and decided this is what she was going to do is really cool,” Lindy Buss said. “(On that car ride), we started talking about it, and actually she came up with the name of it and we bought her domain name in the car on the way to a tournament. So it’s been a fun thing to watch unfold.”

Perhaps it shouldn’t be a surprise that Addie has followed through with her vision. She is now six years into her golfing career, more than half her life, and has remained dedicated to the game since her first swings.

“I started playing when I was five,” Addie said. “My first coach, (former Bright’s Creek pro Jessie Stewart), made it a point to always let me know that the most important thing about golf is to have fun. And it’s always been fun for me.

“I also like that I get to play with my friends. And that it’s more of a competition with myself than anyone else when I’m out there.”

The next big step for Birdies Before Boys will come in late March at the Bright’s Creek Intercollegiate, a two-day tournament expected to include a number of college women’s teams. Buss plans to showcase her clothes at a trunk show for players, a step she hopes eventually leads to having her clothes available for sale in pro shops.

“That wiill be really neat,” Lindy Buss said of the trunk show. “But, really, it’s just been fun to watch her do what she wants to do.”

Addie Buss, meanwhile, is keeping a level head about the show and possible future growth. She’s got a business to run, after all.

Yet, when she looks at the website and the shirts, she can’t help but smile.