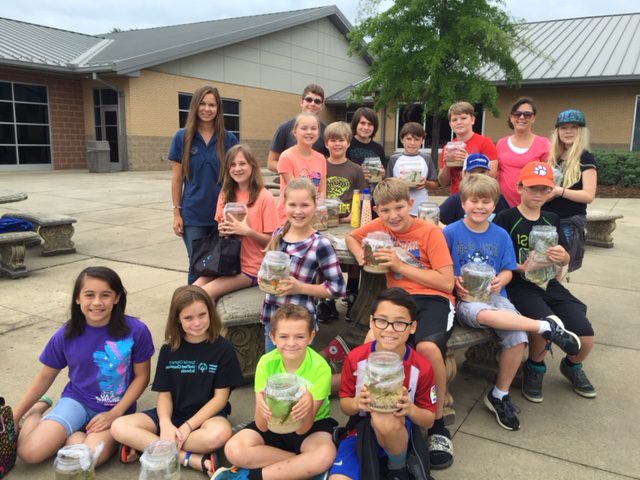 A group of Polk County students recently participated in a water quality camp, learning about stewardship of water, factors that affect water quality and indicators of a good water system.

During the first day of camp, students looked at water samples taken from Laughter Pond near Polk County Middle School and learned about microorganisms found in a freshwater system as well as sources of pollution that cause a decline in water quality. Students then visited three different locations throughout the week to observe aquatic ecosystems and determine the health of the water system.

Campers visited Pisgah Fish Hatchery and learned about the North Carolina Wildlife Resources Commission’s release of hatchery fish. Students spent their last day building their own ecosystem based on what they had learned about healthy aquatic ecosystems.

Students enjoyed the week-long camp, as evidenced by their feedback:

“Camp has been awesome!!! I learned about micro and macro invertebrates, I learned how to tell if the water is good for fish, how to make my own fish aquarium, I learned that pesticides will kill plants and animals and I learned that fish need oxygen and carbon dioxide.”

“This week at camp I learned a lot of new stuff. One thing that I learned is that we only have one percent of all the water on the earth to drink. Also I learned about a lot more macro invertebrates. The activities I enjoyed the most were going to the Pisgah Fish Hatchery and seeing all the different trout and exploring the river.”