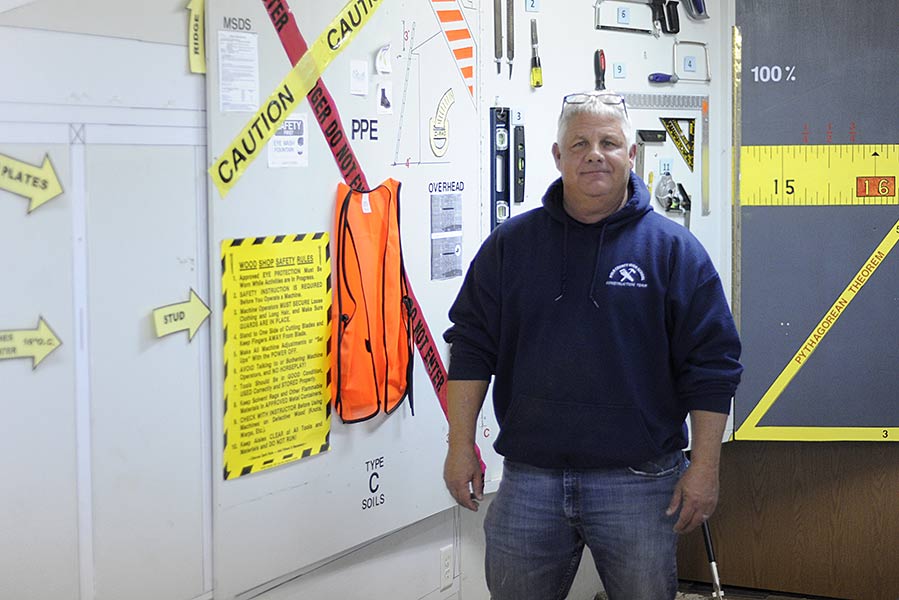 The piers are part of the foundation of Keith Rimer’s vision, boards and blocks on which more than just structures are rising.

Rimer is building pieces of all.

Helping mold the area’s future – that’s one of the reasons that Rimer is Polk County Schools’ current teacher of the year, an honor he treasures more for coming from his peers as any recognition of his own success as he simply tries to pay forward the foundation he received as a student in the district.

“I told the (regional teacher of the year committee), I realize on paper that I’m not qualified to be Teacher of the Year,” he said. “But the ones that sent me here are. They have faith in what I’m doing in my message and know that it needs to be heard.

“The success is not a pat on the back for Keith Rimer. This is a testimony to the strength of Polk County Schools as a whole going back many, many years.”

Rimer’s success, though, is helping strengthen Polk County Schools as well as the area’s future, part of the vision that Rimer had when he left a lucrative role with his own construction business to take over Polk County High School’s program.

Let’s not just teach kids how to use carpentry and construction tools, Rimer suggested, but give them real-life experience that could be used to find jobs after graduation. Part of that approach will benefit the local building industry, he said, providing a source of find well-trained local workers for their job openings. That may help those companies grow, which in turn will create more need for local workers, which in turn could mean more opportunities for PCHS graduates.

But Rimer didn’t envision the skills he planned to teach as being limited to the construction trade.

“I guess I’ve always been concerned about what happens to our young people after they graduate from high school,” said Rimer, who has three sons. “Being in the building industry, my approach was to focus on what’s coming off of the graduation platform, young people that are going to be entering the workforce. Well, they were nowhere to be found. They just weren’t available.

“And as I talked to other people in the workforce as a whole, our county has been starving for young people to enter the workforce. So this position came open and this had been tossed around for several years about the idea of me giving it a shot and, you know, I thought I could come in and offer students a plan B, if nothing else, if college didn’t work out, if their dream job didn’t work out. Could I at least teach work ethics with wood and nails that would leave this classroom and spill over into other classrooms and eventually into their everyday life?

“So this program is not one that we’re just focusing on teaching young people to enter the building industry. It’s teaching them the basics of work ethics, responsibility, working together, completing a task. You know, seeing a glimpse of success.”

Each year teachers at all Polk County Schools nominate and then select one of their peers as that school’s Teacher of the Year. A district committee then interviews those school winners and selects a county honoree, with that person then representing Polk County Schools in regional competition.

While Rimer doesn’t share the typical education background of many past winners, he does possess the same commitment to Polk County School’s motto of “Doing What’s Right For Students” that all selections have had.

“Having experienced many successful years in the private sector as a contractor and small business owner, Mr. Rimer did not need to step into a classroom from the financial perspective,” said Polk County High School Principal Dr. Brandon Schweitzer. “He had built a very successful company and was easily on his way to retirement and financial security. Mr. Rimer’s call to education came as an overwhelming urge to give back to his community.

“Through his company, he had been able to positively affect the lives of young people he worked with. Teaching them a trade and modeling core values was a way to transform their lives into something better, sometimes when it seemed all hope was lost. Public education was a way for him to broaden his reach and positive influence on young men and women and was the driving force behind his desire to join our faculty here at PCHS.

“If you spend just 20 minutes with Mr. Rimer, you will start to understand why he is so highly regarded among our students and staff. Above all things, Mr. Rimer values commitment, honesty, loyalty and work ethic in his students. Everything he does in the classroom is based on these values. Students who have had the privilege of getting to take one of his classes will attest to this and will be quick to tell you how much of an impact it has made on their lives.”

The most visual impact of Rimer’s program sits adjacent to The Bottoms, serving as a backdrop to Polk County baseball games. Each semester, one of Rimer’s classes builds a house, typically a 24×40 model completely finished on the outside. Those houses are sold and transported from PCHS to the buyer, who can then complete the inside as desired.

An ambitious goal has now become a routine part of each semester, garnering attention not only in Polk County, but throughout the region.

“The goal has always been from the day that I applied for the job, this was going to be always a teaching tool for me in this program,” Rimer said. “It wasn’t going to be something that we set out to make a fortune off of. This was something that gave students a different look. It gave them an opportunity to see houses and and learn a repetitious trade skill. They may build this house, but the next semester, if they take my class again, they go, oh, yeah, I know how to do this. Well, that student goes from being a bench warmer to your leader in the classroom and in the field. So that’s where I see progress. You know, that’s the kind of things that I have to look at and see as progress in getting students to engage.

“As far as the houses, this program within the first year somehow got all across the state. The word got out all across the state and even across state lines. I’ve received calls from all over the state. I have had visits to this campus from other school systems wanting to mimic our program because they know it’s got a lot of tentacles that reach out. It’s not just a teaching tool, which is the top priority from the educational side, but it is replenishing your community with affordable houses.”

Helping grow the amount of affordable housing in Polk County is one of Rimer’s visions for the future of the construction program. The recent addition of Eric Morlino to the PCHS faculty and his work with the school’s introductory carpentry classes has convinced Rimer that doubling the program’s building production is feasible – and needed.

“We’re providing an option for the next generation of workforce in Polk County to have an affordable home,” he said. “So the house building program has started out as a teaching tool, but it has blossomed into something that people across the state want a piece of. But we’re doing one a semester. That’s going to change.

“What we’ve done now, we just added on to the foundation to where we can do two at one time. So as our program has grown, Mr. Morlino has jumped right in there. He is a tremendous asset to the program, to the young people in the younger classes, which he usually teaches. They get introduced to it on a smaller scale. So there will come a time when we’re doing two a semester.

“I built for 25 years for people that sometimes were looking for their second and third and sometimes fourth home. And, you know, vacation homes and stuff like that. But my vision here is what can I do to help Polk County and help the young people because there are so many people in Polk County that helped Keith Rimer.”

Rimer thought of all those people recently when he stood at a Polk County Board of Education meeting to be recognized as the district’s teacher of the year, memories of his past overflowing as he reflected on the journey that brought him to a Polk County High School classroom.

“I remembered my fifth grade, my sixth grade teacher, (Catherine) Feagan. Her son was sitting there,” he said. “Those are powerful stories about people that encouraged me to the point where when this opportunity came up for me to come here to Polk County Schools and teach, it wasn’t really a hard decision, because this is a way for me to give back to a community that has given so much to me.

“So the success of my program here, I share that success with all those teachers that kept encouraging me to be different.”