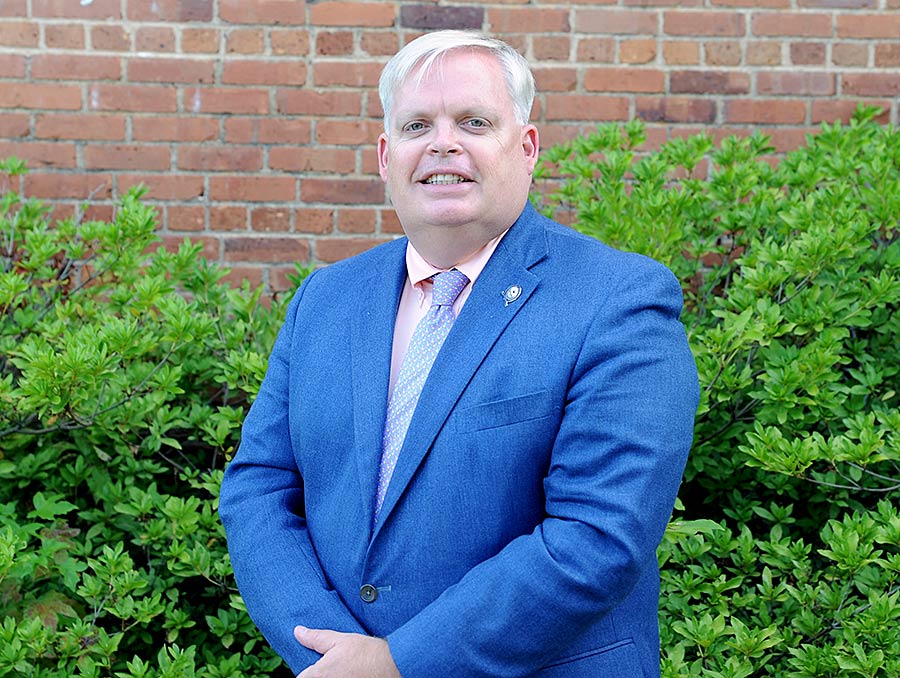 Bill Miller knew that if Polk County Schools had a task that needed to be handled, David Scherping would take care of it.

Ronette Dill knew that if she had a question about anything across the school district, David Scherping would know the answer.

Amanda Ruff knew that if she was having a rough day at work, David Scherping’s attitude would soon make the day brighter.

Each also knows that Scherping’s retirement leaves a void that will be difficult to fill.

Scherping packed his belongings and walked out of Stearns Education Center on Thursday for the final time as a full-time Polk County Schools employee, ending 30 years of service to the district in a variety of roles, each more important than the one preceding it.

Scherping leaves as Polk County’s assistant superintendent, but that title doesn’t begin to convey the range of duties that Scherping handled on a daily basis. Many of his tasks have been reassigned to multiple employees, testament to what those around the district have long thought – no one person could ever replace Scherping.

“He does so much behind-the-scenes work that few employees and community members realize,” said Dill, who also worked in the district in a range of roles and now serves as Grants and Community Partnership Coordinator. “He serves not only the school system, but also many community and county organizations, such as Thermal Belt Outreach, Rotary and so on.

“At the school level, I relied on Dave for all things testing and technology. At the district level, I quickly realized that Dave did so much more than testing and technology. (Superintendent Aaron) Greene often refers to Dave as his Swiss Army knife. I would agree, but add that Dave is the Google of Polk County Schools.  If anyone has a question about the school system, Dave will have the answer.”

Scherping joined Polk County Schools in 1993, then left the classroom in 1999 to become a computer technician for the district. That eventually led to his overseeing technology across the district and expanded roles in testing, building management and nearly anything else a superintendent could assign.

“Dave Scherping is just the ultimate employee,” said Miller, one of those superintendents. “He’s a hard worker, he’s dedicated, he loves our schools and our community and kids. He would bend over backwards to do anything to help any school with any situation.

“He’s also one of those people that’s in there doing the dirty work that’s got to be done, behind the scenes and underappreciated by the public. It’s an enormous loss for Polk County Schools.”

Scherping came to work each day guided by a principle of improving all those around him, of bettering his community and the schools that served it.

“I believe it is everyone’s responsibility to improve the community in which they live,” he said. “I wanted to be known as someone who was giving to their community and not just taking.  My career in Polk County Schools has allowed me great opportunities to learn and grow, while also helping others to improve themselves. Seeing those around me improve their skills and learn new ways to solve problems has been wonderful.”

All those who worked with Scherping would say he more than achieved those goals. In recent years he worked alongside Greene, eventually being named assistant superintendent. Among Scherping’s final projects for the district was overseeing the multi-million dollar HVAC renovation at Polk County High School.

“Mr. Scherping has been an incredible educator and leader over the past 30 years,” Greene said. “His dedication to our mission and commitment to our students, staff, schools and community are to be celebrated and commended. Mr. Scherping has been instrumental in moving Polk County Schools forward, in helping us pursue excellence and achieve at the highest levels, and in working to provide the best possible educational experiences for students.

“People like David Scherping are rare, and he leaves a tremendous leadership legacy to which we all should aspire.”

“Dave has been instrumental in securing the technology devices and programs, testing materials, and facility resources needed in order to make the instructional program in Polk County Schools what it is today,” Crump said. “By supplying teachers with the materials and resources needed to turn classrooms into arenas for success, Dave has been instrumental in helping our school system remain in the top three performing school districts across the state.

“As the Director of Curriculum and Instruction, I have been most impressed with Dave’s ability to multi-task and his well-versed knowledge of literally every aspect of the school system.  Due to Dave’s dedication to Polk County Schools for so many years, he has built a strong foundation and understanding of the inner workings of each department in our school system. If you have a question regarding food service initiatives, technology equipment, federal programs, testing regulations, calendar changes or any other instructional strategy, you just ask Dave.”

“I have worked with Dave for more than 16 years, and he would get calls about anything and everything,” she said. “You could count on Dave to have, find or direct you to the answer you need, and proceed to help you, if needed, in implementing that answer.

“Dave is an all-around good guy with an optimistic attitude that is contagious. His 30 years of experience and him having the larger picture of Polk County Schools and how it all works will be missed greatly.”

Though as modest a soul as can be found, Scherping did point to three achievements with pride:

Scherping’s impact on Polk County, though, is far from over. He and his wife, Carlann, envision spending their retirement years as active members of the community – though with some time spent enjoying a few other locales.

“Carlann and I have given a little over 60 years of combined service to the students, staff and families of Polk County,” he said. “We now want to spend some time focusing on other interests. We will be traveling and volunteering with other community organizations.  We love to get out and enjoy the beautiful natural surroundings that brought us to this area, so we are looking forward to hiking and kayaking during the weekdays now.

“There may be another job in my future, but for now, we want to go out and enjoy this beautiful place in which we live.”

A place made brighter for the past three decades by his presence.