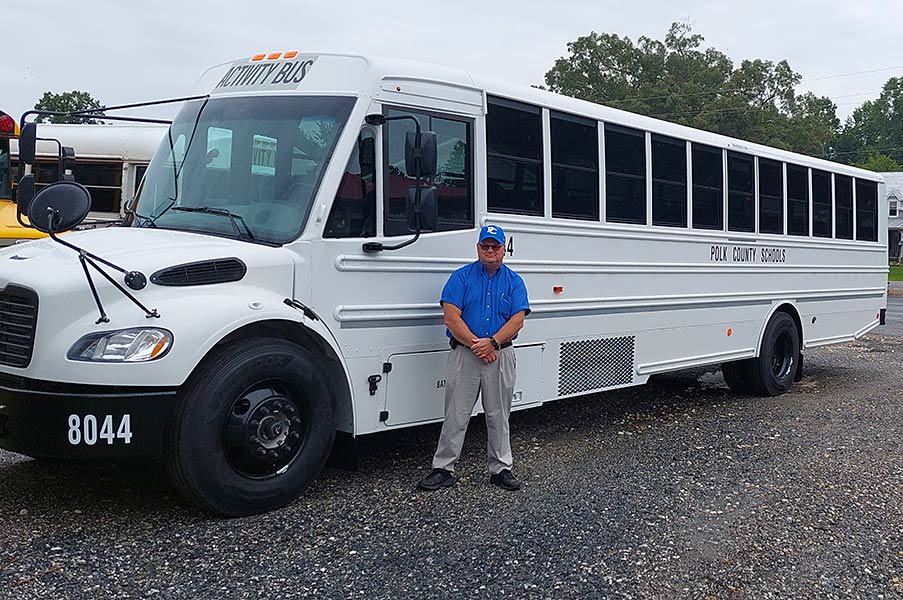 Polk County Schools students are enjoying a pair of new activity buses complete with the latest safety features that are also helping protect the environment.

The district recently received a grant from the North Carolina Department of Environmental Quality of $194,858 to purchase the new buses. The funds became available as part of a federal settlement with Volkswagen regarding violations of the Clean Air Act, the German automaker agreeing to spend almost $15 billion to settle claims of deceiving customers on 2.0 liter diesel vehicles and cheating emissions tests.

North Carolina received more than $90 million as part of the VW Settlement. North Carolina DEQ opted to use part of the settlement money to establish the Diesel Bus and Vehicle Program, seeking to reduce nitrogen oxide emissions by replacing or repowering older diesel buses.

“We feel very fortunate to receive this additional funding to purchase newer, safer and more reliable activity buses,” said Polk County Schools Superintendent Aaron Greene. “It is a huge help to a small district like Polk County Schools. Many thanks to School Transportation Director Lambert Ridings and School Finance Officer Debbie Lovelace for their work throughout the process.”

Ridings said it had been some seven to eight years since the district was last able to purchase a new activity bus. The buses receive heavy use for transporting students to athletic events, field trips and other extracurricular activities.

The new buses are equipped with “all the latest safety features,” Ridings noted, including seat belts, air conditioning and a backup camera. Both buses are already in use.

The goal of the state program is to reduce air emissions, and Ridings said the buses definitely accomplish that. He did give some thought to moving to electric-powered buses, another of the targets of the state initiative.

“We did look at going with electric buses, but we just don’t have the infrastructure here to do that,” Ridings said.

The district has already retired two older buses and is in the process of destroying both to ensure that neither will ever again travel.

“We do have to scrap the older buses so they can’t drive,” Ridings said. “That is part of the process to improve air quality. We have started working on that.”

Ridings also cited the contribution of Keith Wallace, whom Ridings met through his work with the Green Creek Fire Department, as instrumental to the grant proposal’s success.