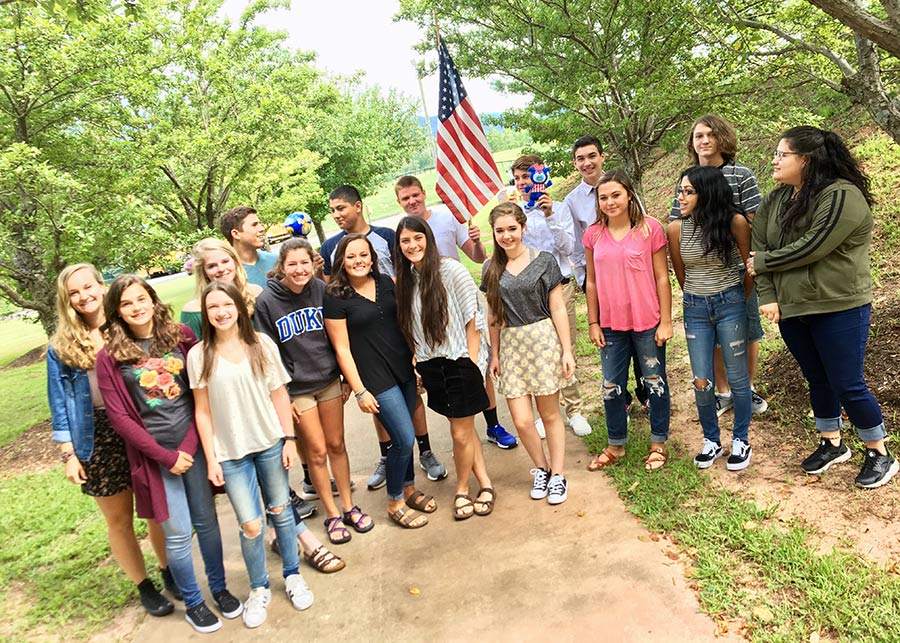 Emotions are as much a part of the first day of school as new classrooms and shiny book bags.

From students to teachers to parents and guardians, the opening day of a new school year often brings a mix of excitement and sadness, anticipation and anxiousness. A good night’s sleep before opening day? It’s not always common.

Most Polk County Schools campuses opened for students on Monday, and across the district, there were smiles and tears, but also a sense of determination among all to make 2017-18 the best year yet. There were plenty of first-day stories to share on Monday. Here are a few of them.

Dawn had yet to break Monday when Jamie Hrobak arrived at Polk County Middle School for the first day of classes.

A former standout high school and college athlete, Hrobak knows well of night-before and pre-game jitters. She felt many of those same emotions about beginning her second year as a sixth grade math teacher at PCMS.

“The night before, you can’t sleep, you’re thinking about everything that’s going on, making lists, making sure you’re prepared,” said Hrobak, who arrived at school at 6 a.m. Monday. “It’s really just nerves and excitement. You see all the kids, especially sixth graders, and they’re nervous coming in but also curious, ready to see what’s going to happen in middle school.”

To help Polk County Middle’s newest students survive their first day on campus, Hrobak made certain to be approachable, to meet and greet students with open ears as much as open arms.

“You want to make sure that everyone feels they can talk to you if they have any questions or concerns,” Hrobak said. “They always tell you as a new teacher, or as a teacher in general, to be more strict the first couple of days. I do try, but it’s really hard not to smile too much. Overall, you just try to be yourself and let them know you care.”

A Polk County High School graduate, Hrobak prefers spending the first day of school helping to shape a new generation of Wolverines rather than being one, even if student life offered a much more relaxed opening day.

“I feel like there’s more pressure on teachers,” Hrobak said. “You’re going to meet 75 to 90 kids and you want to make a good impression versus as a kid, if I ate, maybe learned one or two things and learned six teachers’ names, I was happy.”

Emotional about her final first day before heading off to college next year?

Not the case for Polk County senior Haley Fowler, who found comfort in the experience of opening days past.

“I did not really think about it being my final first day,” said Fowler, Polk County’s senior class president. “I felt at ease because I knew how everything worked and what I needed to do.

“Usually, I’m pretty anxious and stressed, but this year seemed easy. It was just school again.”

As for her approach to the first day, Fowler had a simple philosophy.

“Be ready to work, but also have some fun along the way,” she said.

“To be honest, the first day carried a lot more weight this year than it has in years past,” he said. “The principal’s chair gives quite a different perspective on things. I could not help but be excited about the year and about the awesome things our students and teachers are going to do this year.”

To help move the student body and faculty in that direction, Schweitzer spent most of the opening day looking to spread positive vibes, hoping to build a foundation for success.

“I know that the first day sets the tone and tempo for the whole rest of the year,” Schweitzer said. “As a result, I wanted students to see me out and about smiling and high-fiving people excited about things to come. I’m a big believer that a good start with a good attitude can make all the difference.

“My goals were easy – make sure every student arrives to and from school safely, and make sure we create an atmosphere that is inviting and inclusive to all students. If you can do those things, everything else will begin to fall into place.”

A West Henderson graduate, Schweitzer said he much preferred the first day as an administrator rather than a student.

“I was horrified as a student on my first day,” he said. “I wish I had the kind of confidence that I do now. Don’t get me wrong, I was still nervous today, but not nearly to the extent that I was as a student. It’s an important perspective to keep in mind.”

The parent: Mix of emotions as youngest enters kindergarten

Jessica Wilkins, ScottLynn Whiteside and Dottie Wilson are all smiles Monday on the first day of classes at Tryon Elementary.

It may have been the first day of school for her fourth child, but that didn’t stop the usual range of emotions for Olivia Pleasants Whiteside.

“With each child they have been a little different because each has their own personality and we were at various stages of our parenthood journey,” Whiteside said. “Today it was very much a mix of anticipation, excitement and bittersweetness, some sadness that the preschool years have come to a close for our family. I have no doubt she is in the best possible place for her. She will be very loved and taken care of.”

All four of Whiteside’s kids have been in the kindergarten class of Jessica Wilkins and Dottie Wilson, so there was an air of familiarity about the day. That still didn’t make the morning routine.

“I’m fully prepared in the sense I know what to expect, what they need and what the year will look like, but emotionally, it’s always a journey of closure, new beginnings and change,” Whiteside said. “There is the ‘letting go of your baby,’ but the excitement of more independence and new friends and memories to be made. I think I cried at least a few tears with each child on their first and last days of kindergarten.

“Today hasn’t fully hit me yet. It’s been a whirlwind because I also had one starting middle school as well. My daughter was excited and happy to be going so that definitely helped along with familiar faces to greet me. But I’ve had a child home with me for 11 years now so my own new journey is beginning. I’m sad the preschool years are over, but also excited for an amazing year to come.”

Libby Justice enjoyed her 18th first day of school at Tryon Elementary on Monday, in part because of the variety the start of each new year brings.

“They’re always different, depending on the kids,” said Justice, who teaches third grade at TES. “As a teacher you are wonderfully excited and glad to be back, and I think the kids are glad to be back as well.”

While the kids vary from year to year, Justice stays true to one routine no matter the students or grade she is teaching.

“On the first day, you spend a lot of time getting to know each other and know procedures,” she said. “It’s the day where you get ready for the rest of the year. We get to know each other, and we talk about kindness.”

Though a veteran of many first days, Justice admitted to being anxious and restless on Sunday night.

“The excitement is still there,” she said. “You want to see their faces, and you hope they have a great day.

“Each year, you think you won’t love this year’s class as much as last year’s, but you always do.”